A typical Sand Play room has shelves filled with miniature objects like little people, animals, buildings, house hold items, vehicles, funny and frightening things, super hero’s and many more objects and a tray full of sand. When I introduce parent to Sand Play as one of my prefered modality in working with children,  I often  asked in disbelief ,“How in the world, am I going to help their child with a box of sand and some tiny toys ?“

In  1920’s Dr. Margaret Lowenfeld first developed the therapeutic use of Sand Play and miniatures by getting her clients to combine the sand tray and miniatures to create their “world pictures”. Dora Kalff, a Swiss Jungian analyst adapted Lowenfeld’s method and called the approach “ Sand Play”.

During a Sand Play session, the sand is shaped and little miniature objects are added to create a  three-dimensional picture. The healing process starts the moment client makes contact with the sand. The attraction or the repulsion to any object can be an expression of the unconscious or the  themes in the conscious. The tiny objects soon becomes the symbols of the client’s inner world, representing their feelings, thoughts and unconscious drives. The silence in the room helps to contain and honor the client’s experience so  what is being expressed can continue reverberating within the client.  Any verbal interpretations, reflection and discussions about the tray happens after the client is done with the creation. The therapist makes a record of the picture. This picture provides a window into the unconscious deepens conscious understanding of the individual psyche and provides a framework for future verbal therapy. 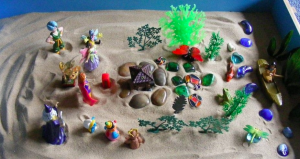 Play is central to a children’s physical, social and emotional health and well being. Sand play is  used with a wide range of children. The free play and the creative component of Sand Play attracts children. The freedom  to create helps the children drop their defences , feel secure early in the process. The three dimentional picture  created  enables children to play out themes that are central to their struggles. Studies have been conducted on the relationship between Gardner’s Seven Multiple Intelligence and Sand Play. Sand Play integrates many of the intelligences through out the play session to ensure effectiveness. Sand Play is actively used in different settings, statistics show that when used in schools, there has been increase in student’s academic performance, reduction in behavioural issues among students, , better resilience and motivation, higher self esteem & confidence, lower stress and anxiety, improved concentration and many more. Sand Play in hospitals help  children deal with various chronic illnesses. The Sand Play helps them process their feelings and learn skills to work through their illnesses. This non verbal therapy works wonders when facilitated by a Sand Therapy Certified professional trained to work with children.

If you are looking to seek help and think that  Play based therapy will work best for your child, call SACAC Counselling office to enquire more about Sand Therapy.

What comes to your mind when you hear the words ‘self-care’? For some of us, self-care may be a cold glass of white wine or a beer at the end of the day; a regular yoga class; an occasional trip to the spa for some relaxation or beauty treatments; or perhaps a weekly commitment to play a sport with friends.

These are all isolated moments of fun, relaxation or enjoyable physical exertion – some ‘me-time’ doing something pleasurable outside daily work and family commitments. But if we are to take the idea of self-care seriously and feel the full benefit of doing so in our lives, it must become more than the occasional moment of relaxation, physical activity or indulgence.

Why would we get serious about self-care? Chronic stress is a silent killer, the hidden factor triggering or exacerbating health issues such as autoimmune disease, strongly implicated in cancer and cardiovascular disease, and increasing our sensitivity to pain. It is associated with the misuse of drugs and alcohol and with overeating ‘comfort’ foods. It impairs our executive functioning – our memory, powers of concentration, creativity and flexibility, planning, problem solving and reasoning.

What is chronic stress? Chronic stress is the physiological and psychological response to emotional pressure experienced for a long period of time where an individual perceives he or she has little or no control. One of the particularly sad features of chronic stress is that many people have lived with it for so long that it feels like their normal reality. Health concerns and conditions, sleep difficulties, a sense of feeling burdened or overwhelmed, irritability, and difficulties in relationships just feel like part of your lot in life or who you are, rather than symptoms of an underlying and treatable problem.

If you recognize yourself or a loved one in the short description of symptoms above, it is wise to consult a psychotherapist or psychologist, just as if you were to find blood in your urine or a lump in your breast or testicles you would consult a physician urgently. People who are committed to engaging with therapy and work to address the stressors in their lives and their responses to them, frequently see a marked improvement in their physical health as well as an improvement in the overall quality of their life. Zest, happiness and vitality returns and cognitive function improves.

How can self-care help us to respond healthily to the emotional pressure that generates stress? In truth, most of us take more active care of our teeth or fingernails than our emotional lives. Psychotherapy can seem to be a costly indulgence, or something for people with ‘serious’ mental illness. Yet what could be more serious or important than tackling something which increases our risk of the most serious diseases, gravely impairs the quality of our lives, inhibits work performance and damages our relationships?

As well as seeking professional support in tackling and treating stress, getting serious about self-care means living each day with mature care and concern for your physical, mental and emotional wellbeing. The food you eat, the liquids you drink, your physical activity levels, your sleep routine, your choice of relaxation activities and hobbies, your spiritual or reflective practice, how you approach your professional life, and how you relate to others, are all factors over which you can regain control and reap the lifelong benefits.  Don’t limit yourself to the occasional moment of rest and relaxation and experience only temporary relief from stress.

The feeling of being stuck and it being impossible to change one’s stressful situation is itself stress talking. Small but committed and serious self-care steps can begin to make a positive difference. What can you do today to show self-care in the food you eat or the liquids you drink, for example? Professional support will assist you in identifying, and above all committing, to the most effective action for you.

Forgiveness is often seen and dismissed as a virtue of the saintly. Many people cling dearly to their anger, pain and sense of injustice. The choice of not forgiving might temporarily give people a sense of power – power to condemn, power to judge and hold the other person guilty, power of righteously being holier than thou. However, going one level deeper, one sees just how hollow and fictitious this power is as you are actually giving your power away, allowing the opposite person and the conflict to remain significant in your life and continue to impact you endlessly, triggering negative emotions and reactions.

When you find yourself unable to forgive, it usually is because the emotional charge is still intense, because there still is significant pain and anger. Many people also end up blocking the natural healing of their emotional wounds, waiting for retribution, apology or for the other person to realise just how wrong they were. However, keeping the pain of the hurtful memories alive and feeding the anger, serves no purpose other than amplifying the mental and emotional distress.

Research has shown that forgiveness reduces stress and toxic anger, helps rebuild self-esteem, reduces depression, anxiety and other mental health symptoms and improves physical health. – “Forgiveness and Health” by Toussaint, Worthington and David R. Williams. So even if it seems difficult or unattainable, it is worth pursuing.

One of the main reasons contributing to the difficulty and resistance to forgiveness stems from the understanding that to forgive is to make things easy for the opposite person – to unburden him from guilt or repercussions of his actions and let him off the hook – to even condone the wrongdoing. This however is not true. Just check, how many of the people you are refusing to forgive are even aware of your emotions, or more importantly, just how many of them are affected by your lack of forgiveness in any way? More often than not, others would have simply carried on with their lives. So the only one it is really affecting is YOU.

Forgiveness is not giving in, it does not make what happened right or okay. Forgiveness is also not the same as justice. It is the acceptance that whatever happened – whether right or wrong, has passed and holding on to the unfairness of it will not change it. The purpose of forgiveness is unburdening you and helping you move on, shedding the unnecessary weight of past baggage.

Forgiveness also does not require reconciliation as it is an internal process and it may not be safe, practical or necessary to reconcile with the other party in person. For e.g. if we now finally choose to forgive the person who bullied us in kindergarten, we don’t necessarily need to go hunt them down and let them know they are forgiven, for the process to be complete.

Bob Enright (PhD), a psychologist who pioneered the study of forgiveness 3 decades ago says that true forgiveness goes a step further and involves offering something positive to the person who has hurt you, in terms of empathy, understanding and compassion.

We assume that forgiveness will happen once we get over the pain, but the flow of healing can happen the other way round too. Be proactive and make life simpler, forgive first and see the pain easing itself out of you. And then the memories, the person himself will lose the ability to affect you as you will be at peace. Practising empathy is a good way to build on the ability to forgive. Some other tips that may help are accepting that there will be pain, that all is impermanent and that you play the most crucial role in the solution to your problems. For deep emotional wounds, therapy can help with the journey of healing and forgiveness.

As I see it, forgiveness is in essence self-care – a choice to move forward lighter and more at peace – it is a gift to yourself. 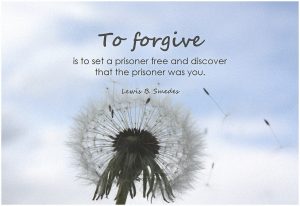